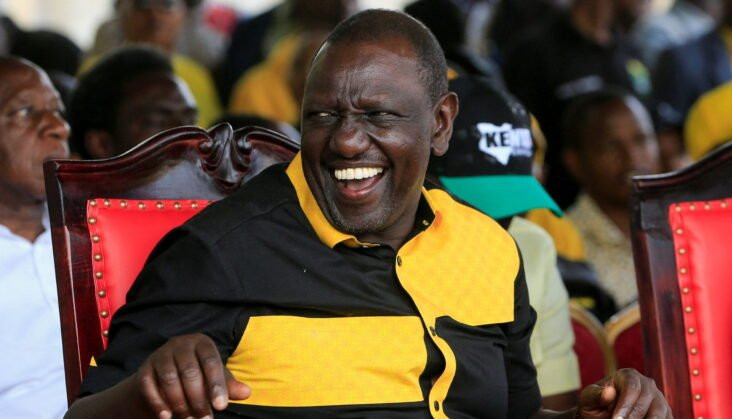 The rags-to-riches businessman is making his first stab at the presidency, a post he thought he had in the bag as a reward for supporting Kenyatta in the 2013 and 2017 elections.

About 50.49 per cent of at least 14million Kenyans voted for Ruto in the decisive poll which now halts the ascendency of the Kenyatta-Odinga families since 1964 in the East African powerhouse. The IEBC data shows 48.5 per cent polled for Odinga.

Who is William Ruto?

Born 21 December, 1966 in Uasin Gishu County, Dr Ruto has risen from humble beginnings in Sugoi to become one of the richest and most powerful men in Kenya.

With almost an entire working career in politics, Dr Ruto, a youthful 55-year-old and on his first presidential campaign, still radiates the vigour and energy first witnessed when he made his entry into politics while still a fresh-faced University of Nairobi graduate at the dawn of multipartyism in 1992.

He was an enthusiastic supporter of President Daniel arap Moi’s Kanu regime, and all along retained the conservative, even reactionary, bent that resisted the transition to democratisation in the early years, and adoption of the progressive new constitutional order in 2010.

Dr Ruto, then just 25, was still trying to find his feet teaching secondary school at some rural outpost after completing university, and making his way up the amorphous Youth for Kanu ’92 organisation, an outfit formed by Moi and given access to unlimited public funds in an attempt to woo back the young generation.

The Deputy President and quintessential system man is running as the outsider, his having successfully repackaged himself as the ‘change’ candidate running an insurgency against the very same establishment he has served as second in command for two terms.

He is the protest candidate whipping up emotions against the government ‘system’, the political and economic elite, and skillfully exploiting public discontent with the economic hardships blamed on the Jubilee government.

There is no doubt that Dr Ruto’s ‘Hustler Nation’ movement, ‘Bottom Up’ economic programme, populist rhetoric and exploitation of the victim card has struck a chord with the masses, and allowed him to make significant inroads into the natural Odinga constituencies in both socio-economic classes and regional blocs.

The politician completing two terms as Deputy President came into office on the back of a career built on faithful service of Ancient Regime, but has magically transformed himself into the champion of the poor and voiceless, with his crusade against the ‘dynasties’ he so loyally served and partnered turning the form book upside down.

Dr Ruto has not only stolen Mr Raila Odinga’s outsider ideology and rhetoric, but for much of the past three or four years has had his principal rival on the defensive and forced him to play catch-up. He has also cloned himself as a spitting image of the vintage Odinga in terms of policy and platforms.

In many ways, Dr Ruto has managed to package himself as the forward-looking candidate promising fresh new ideas and a break from the past; despite his own dodgy past as a cheerleader for the one-party regime and reactionary opposition to the fight for democracy and the new liberal constitution.

At the first multiparty elections in 1992, Mr Odinga won the Lang’ata parliamentary seat in Nairobi on the Ford Kenya ticket, while Dr Ruto was busy navigating the murky world of infighting within YK ’92 and trying to catch President Moi’s eye.

Moi, courtesy of a split opposition featuring three major challengers—Kenneth Matiba of Ford Asili, Mwai Kibaki of DP and Raila Odinga of Ford Kenya—retained the presidency on a minority vote.

Soon after the elections, YK ’92 was scattered as chairman Cyrus Jirongo was accused of plotting against the government.

Some key members led by secretary Sam Nyamweya remained loyal to Moi, while Mr Jirongo and his supporters went into insurgency mode and started flirting with the opposition. Dr Ruto, a minor YK official, adroitly played both sides, cultivating close links with power brokers in the Moi administration such as favourite son Gideon Moi, wheeler-dealer Mark Too and State House aide and business proxy Joshua Kulei.

Come the 1997 election, and Dr Ruto handily won the Eldoret North seat. Mr Odinga also retained the Lang’ata seat, but on the NDP ticket after having ditched Ford Kenya midstream on losing a power struggle to Kijana Wamalwa following the death of Jaramogi in 1994.

As the others protested Moi’s victory, Mr Odinga changed tack and started a policy of cooperation with the long-serving incumbent seeing out his final term under multiparty constitution.

The cooperation resulted in the eventual swallowing of NDP by Kanu, with Mr Odinga emerging as secretary-general of the ‘Independence’ party that had ruled Kenya since 1963.

The merger was also part of Moi’s succession plan as he served out his final term under the multiparty constitution, bringing in a crop of youthful leaders to replace his old guard.

Among the key players in the scheme was Dr Ruto, who also brought in his old YK92 colleague Jirongo, who earned a cabinet slot. Dr Ruto settled for the post of Director of Elections, and with Mr Gideon Moi became the key players behind a plan to hand Mr Uhuru Kenyatta the succession keys.

When Moi finally named Mr Kenyatta as his chosen successor, it was Mr Odinga who mustered the guile and courage to lead a rebellion that ultimately resulted in mass defection by a whole galaxy of powerful figures to back the Kibaki’s third presidential bid under the newly-crafted National Alliance of Kenya, a triumvirate of Kibaki, Wamalwa and Ms Ngilu.

When Mr Odinga, Saitoti, Mr Musyoka and others crossed over, the bigger opposition alliance was christened National Rainbow Coalition (Narc).

But Kibaki easily won the 2002 presidential elections, with Mr Odinga becoming a powerful minister for Public Works, Roads and Housing. Mr Kenyatta took up his role as leader of the opposition, with Dr Ruto a key figure in Kanu.

Things turned around in 2005 when Mr Odinga and other key figures in the Kibaki government who had crossed over from Kanu in 2002 rejected a proposed new constitution.

They teamed up with Mr Kenyatta and Dr Ruto in a movement driving ‘Orange’ No campaign against the ‘Banana’ Yes in the referendum.

Once constitutional proposals backed by President Kibaki were defeated in the referendum, he reconstituted his Cabinet by dropping Mr Odinga and leading No campaigners.

The changes led to the Orange campaign morphing into the Orange Democratic Movement led by Mr Odinga, with Dr Ruto and Mr Mudavadi coming is as key lieutenants.