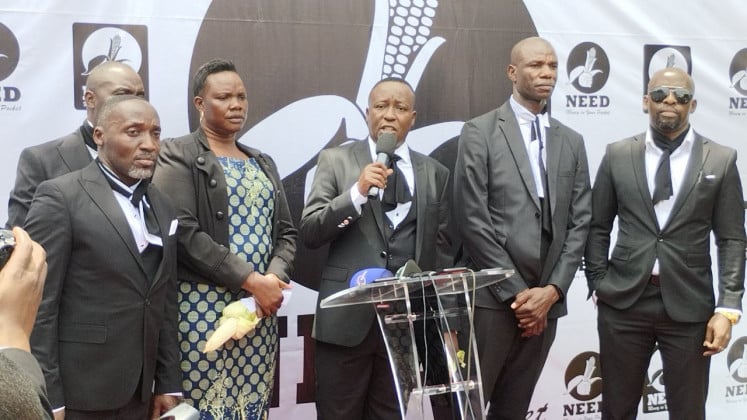 NEED was Monday, October 3, 2022, unveiled as Kabuleta’s new political party at a Delegates Conference held at their headquarters in Bugolobi, a Kampala Suburb.

Launched last year a pressure group, NEED has now merged with the People’s United Movement (PUM) to become one party, with Joseph Kabuleta as its founding president.

Addressing the party delegates and media today, Mr. Kabuleta explained that he became part of PUM two years back although he chose to run for presidency as independent in the 2021 elections for reasons he didn’t reveal.

“As we were heading into the (2021) elections, I was approached by Mr Ogemba and his colleagues and they told me that they had been keenly following my arguments and concluded that we have a lot in common and we share the same ideology they had when they registered their party in October 2005,” said Kabuleta on Monday afternoon.

Kabuleta who now seems focused on the 2026 presidential, parliamentary and local council elections with promises of “putting money in Ugandans’ pockets” says the new party will now become his new political uniform as a base for the dissemination of his message of economic growth to all Ugandans nationwide.

He further warned the ruling NRM government that change is definitely coming and will happen very soon and called upon Ugandans to join him as he preaches the gospel of economic empowerment and financial liberation, which he claims the ruling government has deprived of Ugandans for years.

“Change will definitely happen, the change that Need proposes will definitely be to the benefit of everyone. It’s possible to empower people and put money in their pockets without giving them handouts,” Kabuleta resoundingly warned.

“We believe that the resources we have in this country are enough to give the 40 million Ugandans a very decent life. We have enough resources in this country to go by, the only problem has been the greedy people in power who want to personalise them,” he added.

Mr. Kabuleta further assured Ugandans that the change NEED proposes will be to the benefit of every citizen, saying that it was not the kind of change that causes disruptions, disorder or that seeks old scores.

“We are not coming after anybody’s wealth. If you are rich, good for you. You are not on our first order of business when we take power. Our priority will be the millions of destitute people dispersed across the country. We believe that it is possible to empower people and put money in their pockets without giving them handouts. That is what NEED is all about,” he noted.

Kabuleta also use the opportunity to unveil his inaugural party cabinet of chosen from the different regions of the country, who include; the Vice President Ms Evelyn Laker from Gulu, Mr Odaka Asuman as the Party Secretary General from Budaka, Omulangira Joe Jjuuko Nakibinge as the Organizing Secretary and Moses Matovu as the Publicity Secretary both from Buganda.

He said more members of the party’s National Executive committee would be announced soon.

On his part, the outgoing PUM President Mr Shadrach Ogemba implored party members to put respect in the new constitution and be loyal to the new party leadership.

“I appeal to you, let’s share our challenges and success and build consensus among ourselves. If you don’t build consensus, it will be hard to work together as a united family,” he said.

NEED also unveiled its slogan “Money in Your Pocket” hinged on empowering Ugandans with economic power to change their standard of living and stand out in the ever-changing economy and chose the maize corb🌽 as its emblem signifying Uganda’s agricultural growth and productivity.

The official party colours are black and white, a colour he said signifies transparency, truth and contrast, all of which combine to formulate his political ideology henceforth.

NEED becomes the latest addition to the list of political parties in the country, the newest after the opposition National Unity Platform (NUP) launched by Robert Kyagulanyi alias Bobi Wine two years ago, all with intent to oust Mr Museveni from power and end his 30+ years reign at the helm of Uganda’s Presidency.

As of 2021, the Electoral Commission of Uganda listed 25 parties duly registered to participate in the political affairs of the country, and now NEED becomes the 26th one.