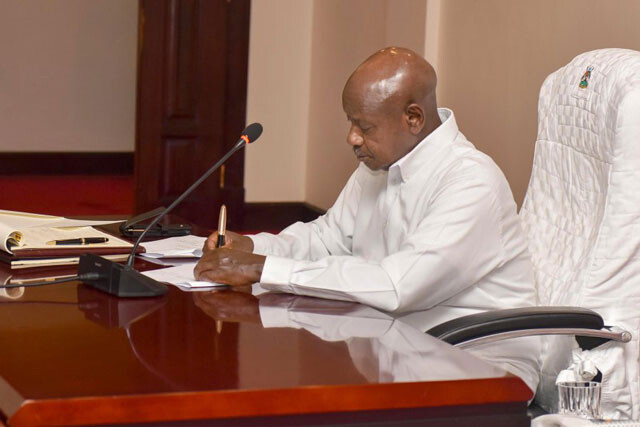 Other bills include; the Physical Planners’ Registration Act, 2022, the Kampala Capital City (Amendment) Act, 2022, and the Mining and Minerals Act, 2022.

Other bills include; the Physical Planners’ Registration Act, 2022, the Kampala Capital City (Amendment) Act, 2022, and the Mining and Minerals Act, 2022.

The office of the State House Thursday revealed that the President assented to the bills after they were recently passed by the Parliament of Uganda pending his approval.

The computer misuse bill which now becomes an act of parliament recently faced criticism from several human rights defenders and stakeholders arguing that it was drafted in bad faith, to protect the corrupt while penalising those demanding for accountability from their leaders.

The Act also listed a raft of punitive measures against people who send malicious information, hate speech, or unsolicited information with a suggested punishment for the convicted person being Shs15 million or a seven-year jail term, if not both.

With the deletion of clauses that sought to bar convicts under the law from holding public office or running for elections in 10 years, the rest of the clauses unanimously sailed through uncontested, with MP Gorreth Namugga (NUP, Mawogola County South) dissenting.

A new clause in the bill, proposed by the ICT committee chairperson, Hon. Moses Magogo, defined social media and created penalties for computer users who take refuge in pseudo accounts.

The clause reads: “A person who uses social media to publish, distribute or share information, prohibited under the laws of Uganda or using a disguised or false identity, commits an offence”.

A person who manages an account of an organisation where this happens will be held liable for the commission of the offence, the bill provides.

A person who commits the offence under the clause in issue shall, on conviction, suffer either a fine of Shs16 million, five years in jail or both fine and imprisonment.

Social media accounts that are verified will be presumed to be owned by the persons in whose names the accounts are run, unless the contrary is proved.

Also, a person whose telephone numbers and or email addresses have been used in creating social media pages, will be personally liable for prosecution for offences committed under the act as amended.

Hon. Magogo justified the clause as being intended to “provide for the regulation of social media”.

The bill also criminalised and defined unsolicited information, but excused commercial adverts from the categorisation, granting advertisers the liberty to share information with target audiences.