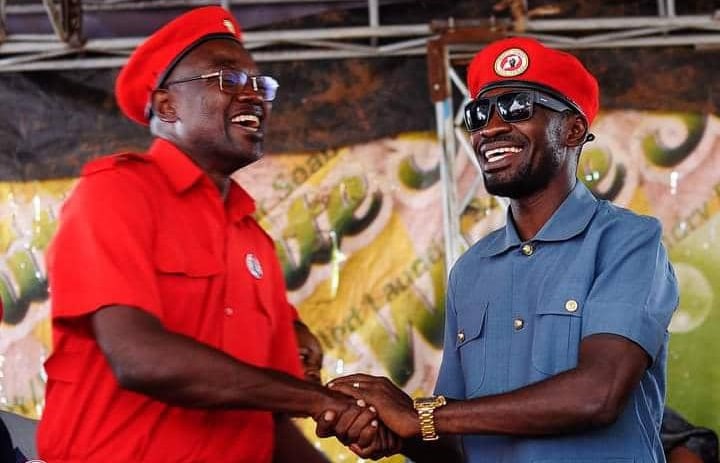 Mr Kaluya served as the constituency MP from 2016-2021 on independent ticket but lost the seat to NRM’s Hon Milton Muwuma Kalulu during last year’s elections.

Kyagulanyi, who was the chief guest at the function challenged the public to use their powers and task their leaders to liberate them citing that it’s not a joking matter and urged them not to accept peanuts at expense of their rights.

“You have the powers and if you don’t do the right thing just know that you haven’t used your powers. Task your leaders to lead you to liberation, follow you in liberation or quit and leave you alone,” Kyagulanyi said before emphasizing that “we’re not joking but these are serious issues, whenever you keep quiet after getting peanuts, you’re selling your country,”

Bobi wine said he met Kaluya in the 10th parliament and identified him with some values in common. He adds that they were friends even before coming to parliament.

“We were together with Hon Kaluya in the 10th parliament and we had similar values especially when president Museveni wanted to change the constitution. Even before I became a member of parliament, I was friendly to Hon Kaluya,”

However, Bobi wine termed Kaluya as someone who was still timid at that time but could always beseech him to join the struggle. He urged him to value the people since they determine the whole journey.

“I always tell everyone that those people are our bosses and if I also changes and start speaking contradictory stories, they can chase me also. The agreement we have with those people is to speak what oppresses them and to speak the truth, those people really love you and they are more powerful than Museveni and his guns,”

“They trust you and wants change. When you betray these people, you will ashame me as your friend. But I’m confident enough because I have known you for long. To the general public, please gauge us basing on our actions not words,” Kyagulanyi emphasized.

He whispered to Hon Kaluya that they will start tormenting him, try to arrest him, fire tear gas at him, and stage cases against him but tasked him not to lose hope since people are ready to move with him.

Kyagulanyi rallied locals to support him citing that it’s the right time to stand together for a purpose.
“Kaluya has come to your side without a gun but has trusted you, I always tell you that whoever stands with you please stand with him also, encourage him not to backslide. This Uganda is for us all,” Kyagulanyi said before quoting King Martin Luther’s saying that the time is always right to do what’s right.

He blamed President Museveni for wondering how people in Busoga thrive amidst the untold poverty in Busoga since they used to plant Coffee, cotton, used to be an industrial center not only for Uganda but also East African.

Bobi Wine said Busoga used to get good money but it’s not the case these days citing that NRM government has stepped in them all.

Hon Kaluya commended Kyagulanyi for steering the struggle and pinned the government of Uganda whom he said doesn’t appreciate even after serving them diligently.
“I take this opportunity to welcome you into my home, what we have achieved today is not a minor statement. We have been serving this nation but they don’t appreciate it, no one here has more money than Kyagulanyi but he has always stood in the struggle because we’re in oppression and captivity,” Hon Kaluya said.

He officially crossed to NUP amidst refuting allegations that he is gathering a fresh political base. He confirmed to this publication that he is fed up with the ruling government.
“Today I have come to tell the whole world that I’m crossing four years to elections. Some people are saying that I’m looking for MP position but remember I was an MP on independent and still I can make it on independent but I’m saying that enough is enough”,

“NRM has got someone to disturb them given their hypocrisy, self-seeking attitudes, theft, corruption, among others,” he added loudly before telling people that “You’re my energy in the battle which I have declared today and I’m trusting you so much. Let me tell you Kyagulanyi, Kaluya who has joined you today is not a usual man, we are going to put right everything in NUP which are not moving well in Busoga.

Kaluya sent a warning signal to security especially police in the area that he is much determined to fight whoever will try to stop or interrupt his lawful plans. He added that even if he die in the struggle, the family should not demand compensation from NUP’s president and says in case so, only Kyagulanyi’s songs should be played at his funeral.

The function attracted leaders basically from the opposition especially the National Unity Platform (NUP) both from local and national settings. The head of Ideology, patriotism and training in NUP, Pastor Andrew Muwanguzi commended the president for his love for the sub-region and Uganda as a whole citing that they are ready to serve with Hon Kaluya.