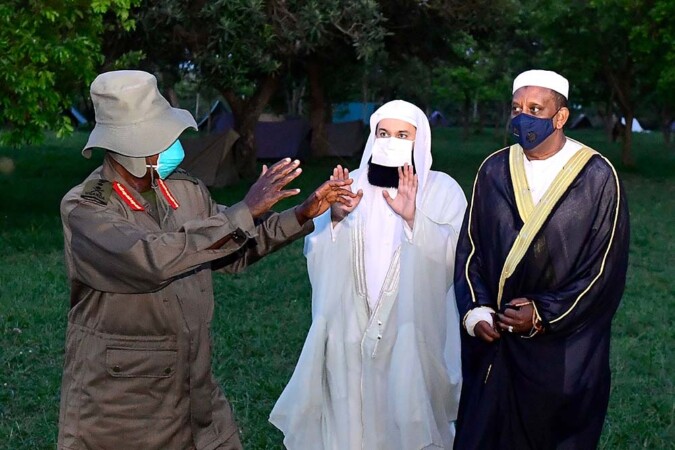 President Museveni thanked Mufti Menk for praying for him and the country. Photo Credit: NRM Online

The President using his official Twitter handle said the meeting took place at the state lodge in Kyankwanzi on Tuesday (April 27, 2021) evening.

“I have met the respectable Mufti Menk at the state lodge in Kyankwanzi this evening. I am in agreement with his teachings on building bridges, harmony with Allah and mankind. Thank you for praying for me and the country. Amen,” Museveni said.

The 45-year-old Zimbabwean Muslim scholar, who is slated to attend the inauguration of Musa Quran Memorisation Centre today, arrived in the country on Sunday night for a three-day visit.

The motivational speaker’s visit is aimed at laying the foundation stone of Musa Islamic Centre and the Charity Iftar. He was invited by Pearl of Africa Hotel and the Imnaq Social Development and Dawa.

Menk also met several Muslim clerics and leaders in the country. He is expected to visit several tourist sites including the Source of the Nile in Jinja, and attend a number of conferences in which he is expected to give motivational talks.

Targeting mostly the youth, Mufti Menk has a following of over 500 million followers globally. He is the director of Daarul ilm (Islamic Educational Canter) of the Majlisul Ulama an Islamic welfare organisation, which caters to the needs of the Muslim population of Zimbabwe, especially in Islamic education.

Mufti Menk was born in Harare, where he undertook his initial Islamic studies with his father, Maulana Musa Menk, memorizing the Quran and learning Arabic, Urdu and Hanafi fiqh. He subsequently studied at the Islamic University of Madinah. He completed his Islamic studies and became a Mufti in the Hanafi fiqh at Dār Al-‘Ulūm Kantharia, Gujurat, India. Menk is known especially in eastern Africa and teaches internationally.