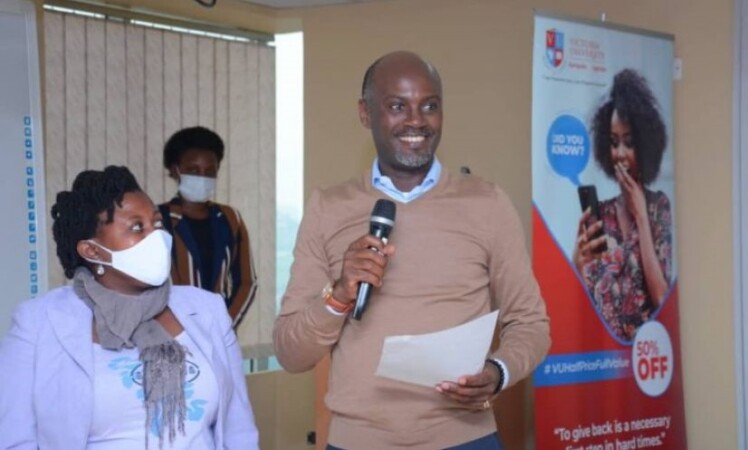 Seasoned Journalist Andrew Mwenda has criticized the security operatives for the inhuman way in which they arrested the Vice Chancellor of Victoria University Dr. Lawrence Muganga yesterday (Thursday) morning.

On Thursday morning ununiformed men carrying guns matched into Victoria University campuses located on Jinja Road in Kampala and violently arrested Dr Muganga who they dragged into a waiting minibus commonly known as drones and sped off to an unknown destination. This has riled Mwenda, a friend of Muganga.

According to Mwenda the manner in which Muganga was arrested is synonymous with former President Idi Amin Dada’s regime.

“Why do Ugandan security agencies use methods last employed by Idi Amin’s goons to arrest people? Couldn’t they have invited Lawrence Muganga, the vice chancellor of Victoria University, to police for questioning and then detain him? What is so hard with acting civilized?” Mwenda posted on Twitter.

“This is the more disturbing because only a few weeks ago, President Yoweri Museveni went on television to speak against these forms of barbaric arrests, actually abductions. Was the president merely pretending or do these security agents not listen to him anymore?” Mwenda, who is also a close ally of the current regime added.

Reacting to circulating news that Dr. Muganga has been kidnapped; Uganda People’s Defense Forces spokesperson Brig Flavia Byekwaso denied the kidnap reports saying he had been arrested. Arrested, not kidnapped.

“Social media reports that Vice Chancellor Victoria University Dr Lawrence Muganga was kidnapped are false. He was arrested by joint Security Forces in connection with espionage and illegal stay in the country. Investigations into the matter have commenced.” the UPDF said.

Social media speculation was Thursday when Dr Muganda was arrested ripe that he was working as a spy for the Rwandan government. This allegation was largely based on Dr Muganga’s working time in Kigali and with Paul Kagame, Rwanda’s president.

Not directly agreeing with the notion that Dr Muganga works for the Rwanda government as a spy, Mwenda, who is also a close ally of Kagame and the Kigali establishment called for both governments to sort out their differences.

Mwenda said” “For all the talk about the necessity of East African integration, one wonders why Kampala finds it difficult to make some diplomatic reproachment with Kigali, a factor that would cool nerves and end the incessant internal fight against Ugandans of Banyarwanda culture!”