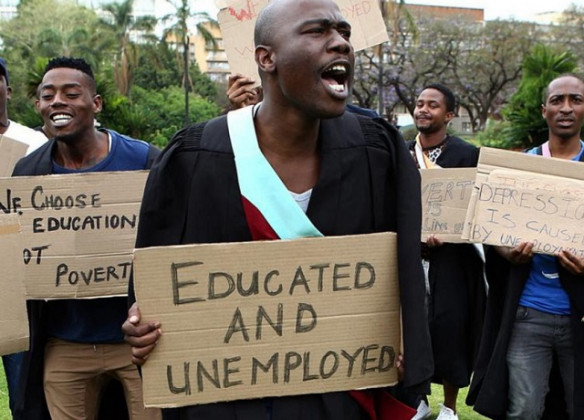 The first problem is that a university degree (does not) just provide someone an opportunity to search and compete for a secure well-paying job but that it guarantees (or should guarantee) such a job.

There are two suffocating beliefs among the vast majority of educated Ugandans. The first is that a university degree (does not) just provide someone an opportunity to search and compete for a secure well-paying job but that it guarantees (or should guarantee) such a job. Hence it does not matter whether the person concerned has the requisite skills that are demanded by employers; what matters is the piece of paper out of a university.

The second is that the source of individual and collective prosperity is the state’s welfare programs. Listen even to the most enlightened Ugandans, they will tell you that the problem of Uganda (or Africa for that matter) is political leaders. That the citizen is simply a passive victim of bad leadership, not an active participant in shaping his personal destiny and that of the country. So, for individual citizens and the nation to be prosperous, they need the state to create jobs, pay for their education and health, provide seed capital for investment etc. while they do nothing in return.

To drive this point home, many Ugandan (and African) intellectuals cite Singapore’s Lee Kuan Yew or South Korea’s Park Chung Hee or Dubai’s Sheik Mohamed Bib Rashid Al Maktoum as the leader-heroes who transformed their nations. There is always a contradiction: the very people who want this transformative leader-hero are also the same people who want checks and balances on the exercise of executive power. Yet if transformation is to be leader-driven, such a leader should be free to exercise power for the good of his country without being checked and balanced by political institutions or other societal forces.

I often ask: if political leaders are drivers of prosperity, who was the leader of Belgium or Holland or Norway or Sweden or Denmark or Austria or UK or USA or France or New Zeeland or Australia or Italy or Germany or Japan, that made any of these nations prosperous? Besides, if Lee Kuan Yew is the explanation for Singapore’s success which leader is responsible for Hong Kong’s prosperity – since both countries have similar per capita GDP? The only common thing I see between the two countries is that they are both predominantly ethnic Chinese; Hong Kong is 92% ethnic Chinese while Singapore is 76% ethnic Chinese.

In spite of a long history of political and economic discrimination in USA, Chinese have never produced ethnic leaders championing their cause. There has never been a civil rights movement for the Chinese to produce a Martin Luther King Jn, or affirmative action. I really do not know what makes them successful but there must be something in their culture, attitudes, mentalities. It is possible that the Chinese are successful because they do not look to political agitation through the state as the source of prosperity but their individual and community networks in the market.

What explains the success of Indians (with a per capita income of $127,000) and Pakistani ($87,000) Ghanians and Nigerians ($69,000) in USA when their home countries have per capita incomes of less than $2,500? It is possible the accommodations and compromises that make politics work in their countries also constrain individual and collective economic prosperity. May be the educated in these countries are always looking to politics for personal and collective advancement. But when in the USA, they recognise that this path (of political agitation) is not available hence they rely on their wits.

Go downtown Kampala and you will find the entrepreneurs with huge turnover of businesses are equally people with the least education. Why? They recognise that without academic papers, one cannot get a job in the formal private sector or in government. Forced onto the street, they have no expectation of entitlements from the state or multinational corporations that dominate our economy. So, they go onto the street to do business.

Most of these entrepreneurs begin small; often as vendors, hawkers, kiosk owners etc. Through hard work and ingenuity, they climb the economic ladder. It is they who hire the educated, again demonstrating that education is important but not the only predictor of success. My point is not that education is useless but rather that it imparts upon us very dysfunctional mentalities such as entitlement to a job or welfare from the state. Our educated people spend too much time in political agitation when they can do better exploiting available opportunities in the market.