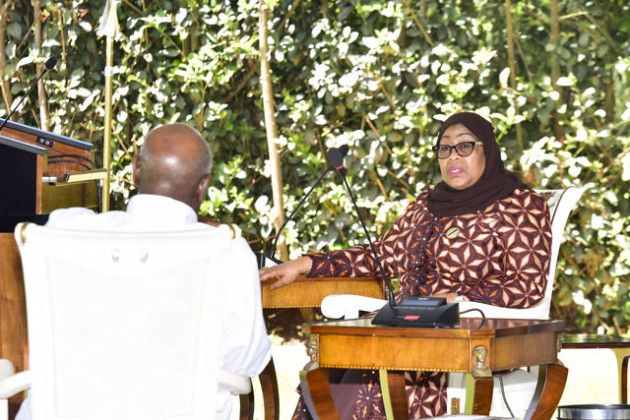 We thank President Museveni and President Samia Suluh for building a healthy diplomatic relationship intended to expedite the tenets of the East African integration for the benefit of it’s citizens.

President Suluhu and Museveni on a recent visit to Uganda's capital, Kampala.

East Africa has been blessed for the first time with a first woman President following the death of President John Pombe Magufuli of Tanzania. The good news is that she has not disappointed, she has shown that women are outperformers.

According to an analysis of thousands of 360-degree reviews, women outscored men on 17 of the 19 capabilities that differentiate excellent leaders from average. Women scored 84%.

Women were rated as excelling in taking initiative, acting with resilience, practicing self-development, displayed high integrity and honesty unlike their counterparts the men.

Besides the speedy signing of the East African crude oil pipeline with Uganda, with less than 2 years in power,this magical feminine leader has once again helped to improve the Private sector development of Uganda and Tanzania as seen below:

For starters, Uganda has a latex factory in Namanve industrial park that makes critical medical consumables in health care called surgical gloves. The company which is the only in the region is registered as the East African Medical Vitals Ltd.

We thank President Museveni and President Samia Suluhu for building a healthy diplomatic relationship intended to expedite the tenets of the East African integration for the benefit of it’s citizens.

In this, we learn that good leadership should not be determined by a political wave, but leadership should also be what you can be able to put on the table for your citizens through excellent lobbying skills which is securing the citizens.

The writer is a Secretary General of the Uganda Poor youth movement.