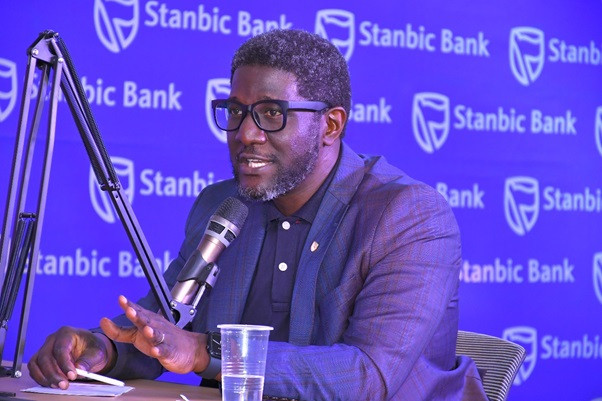 Mwogeza who joined Stanbic Bank—a member of the Standard Bank Group, in 2010, served in different senior managerial roles before being appointed Chief Finance Officer in 2015 until he switched roles

KAMPALA, UGANDA: It was an emotive affair—one that confirms the saying that ‘goodbye is the saddest word’ as Stanbic Bank Uganda bid farewell, last Friday, to their decorated Executive Head for Consumer and Affluent Banking, Sam Mwogeza, who is leaving after 12 illustrious years with the lender.

Mwogeza who joined Stanbic Bank—a member of the Standard Bank Group, in 2010, served in different senior managerial roles before being appointed Chief Finance Officer in 2015 until he switched roles in March 2021, becoming Executive Head for Consumer and Affluent Banking.

In 2019, Mwogeza was awarded CPA of the Year at the Accountancy Service Awards (ASA) in recognition of his role in founding the Accountants Convention at Stanbic Bank, a platform which provides the opportunity for accounting students and members to discuss the latest updates in accountancy and excellence in financial reporting at Stanbic Bank.

Under his leadership as Executive Head for Consumer and Affluent Banking, the bank won the 2021 and 2022 Platinum Consumer Choice Awards in ‘best commercial and development bank’ category.

Ride of a lifetime

Speaking at the farewell party organised by the Bank in his honour, Mwogeza said, “My time at Stanbic has been a ride of a lifetime and I am grateful to everyone who has made it such a worthwhile experience. The fantastic leadership of the various Chief Executives over the years, including our current leader, Anne (Juuko), the teams I worked with in different capacities, the entire staff community and our customers, it was an honour working with all of you.”

In her farewell remarks, Chief Executive Anne Juuko said, “at Stanbic, we say that once a blue, always a blue—Sam is leaving but he will always be a dear member of our blue family and the fruits of his work which was fully dedicated to creating value for our customers and shareholders will always be remembered and honoured by the Bank. On behalf of everyone, I wish you good luck and success in your next undertaking.”

Mwogeza has not revealed his next career move but reliable sources say he is taking a break from banking—we shall keep you posted.