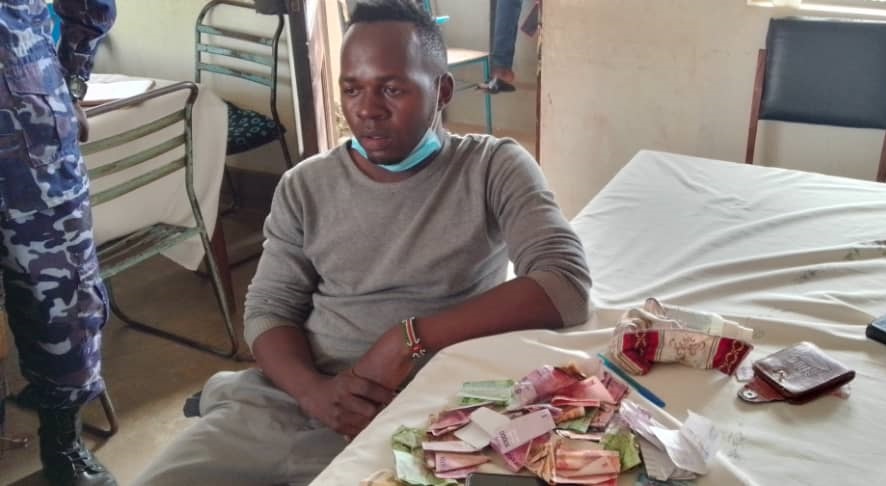 Ssempija was arrested as he tried to extort 50,000= from one Bampalana Muhammad citing that he was going to work on his passport in a short time.

The suspect, a resident of Kisenyi cell, northern division in Mbale city was arrested on Monday, October 31, 2022 as per police reports.

Elgon region police spokesperson ASP Rogers Chrispus Taitika confirmed the arrest, saying he was arrested as he tried to extort 50,000= from one Bampalana Muhammad citing that he was going to work on his passport in a short time. The deal flopped as he was arrested on receiving the note.

“It’s alleged that he was with Bampalana Muhammad whom he asked for 50,000= to speed up his process of obtaining a passport. Bampalana informed authorities and we managed to arrest and detain him at Mbale central police station,” said ASP Rogers Chrispus Taitika

Allegation points out that the suspect has been getting money from people under the guise of helping them to get express passports and this time round, he was netted after receiving a marked 50,000= note from Bampalana, a thing which flopped his deal.

Bampalana whom DailyExpress learnt that he hails from Jinja reportedly got a message to pick his passport, only to be twisted whenever he went to pick it. He says that his passport application was filed on October 3, 2022.

She noted that the complainant (Bampalana) reported the matter to her office in Nakaloke before getting police officers who proceeded along with her and the complainant to the scene.
Mwanjuzi reportedly marked and photocopied the 50,000= note before handing it to Bampalana in a planned arrest process.

“Bampalana came to my office in Nakaloke for help but when he told me about someone asking for money, I decided to surrender a 50,000= note to him after marking and photocopying it,” RCC Mwanjuzi said.

The suspect (Sempijja Sharif) who was disguising to be selling face masks around the immigration office was arrested immediately after receiving the money.

The marked note of 50,000= was recovered and exhibited with other notes suspected to be out of extortion.

Maboga Sulaina, another passport application says people working in the Immigration office Mbale are not working effectively since they are mostly working on people with money.

“The people working in Immigration are very arrogant, they don’t listen to us but only knows those with money,” Maboga said.

DailyExpress has learnt that Bampalana and many others who have been going through similar hardship have finally got their passports today.

Meanwhile, police have confirmed to this publication that the case file of the suspect is being worked on before producing him in court to answer various cases preferred against him.