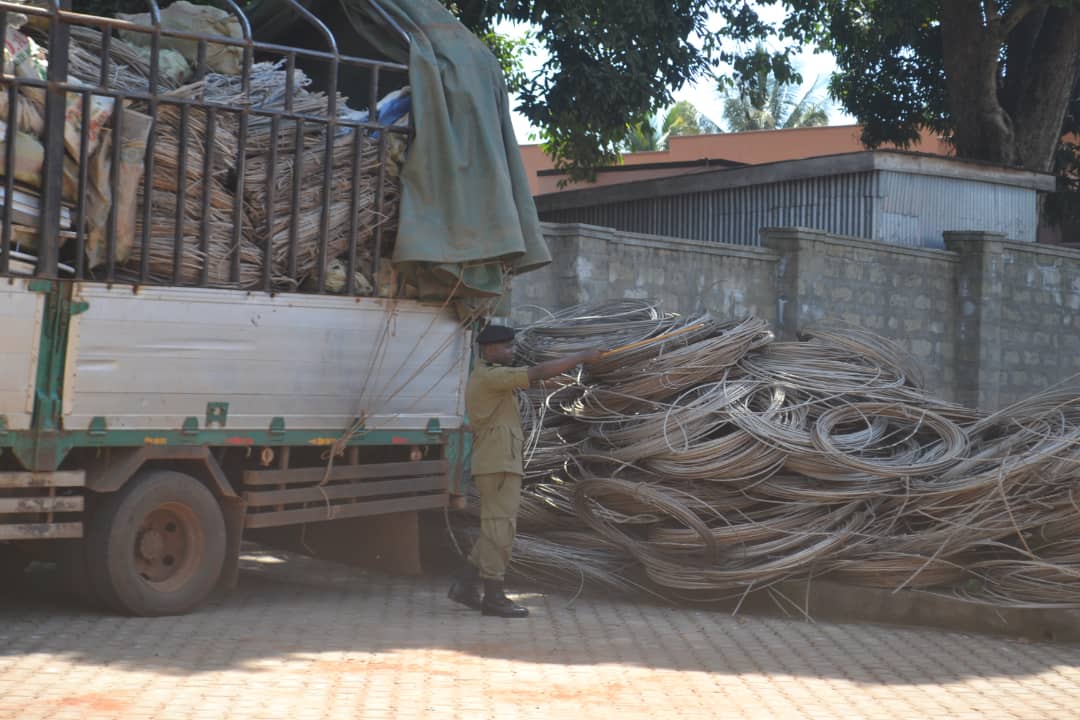 It is alleged that the Fuso was from Kisenyi in Kampala and the assortment of the loaded electrical wires were being taken to Giant Uganda Company Limited in Masese, Jinja City.

The Fuso truck which was intercepted with electrical wires

JINJA, UGANDA: Police in Jinja have intercepted and impounded a vehicle carrying electricity conductors and two people were arrested including the driver to aid in investigations.

The suspects identified as Moses Lukenge, 37, the driver and a resident of Kyebando in Kampala and Umaru Ibanda a resident of Nansana in Kampala were arrested on Wednesday, January 04, 2023 after a Fuso truck registration number UAZ 691T loaded with electricity conductors in which they were traveling was intercepted at Bugembe in Jinja.

It’s alleged that the Fuso was from Kisenyi in Kampala and the assortment of the loaded electrical wires were being taken to Giant Uganda Company Limited in Masese, Jinja City.

“We have impounded a motor vehicle FUSO Reg No UAZ 691T loaded with electricity conductors which we trailed and intercepted the vehicle at Bugembe. The the driver and broker who was escorting the materials to Giant Uganda company limited in Masese, Jinja city have since been arrested to help with investigations,” said ASP James Mubi, the Kiira Regional Police Spokesperson.

He explained that Police has now picked interest in finding out the owners of the wires to be held accountable, adding that the Fuso owner will too be arrested should be established that he/she has a connection in the unlawful business.

“We have picked interest in finding out the owners of the wires such that they can be arrested and charged. The owner of the motor vehicle will also be arrested if it’s found out that he/she has a connection in this business,” ASP Mubi said.

Consequently, Police in Kiira Region has launched an aggressive operation to stop wrong elements from involving in scrap business and tasked all scrap dealers to get an outstanding leadership within seven days in order to fight vandalism of electricity infrastructure.

“All scrap dealers in Jinja city and Jinja district are tasked to get proper and vetted leadership in seven days to fight vandalism of electricity infrastructure. We are going to conduct aggressive operation to weed out wrong elements in the  scrap business,” ASP Mubi said before adding that police will conduct an intense search on all factories and shops suspected to be involved in the vandalism.

The development comes just less than two weeks when some electrical wires were recovered in the same company of Giant Uganda Company Limited in Masese Jinja resulting in the arrest of the owner of the wires, Mr Edward Katongole and his compliance on December 23, 2022. The suspects were later produced before court in Kampala.