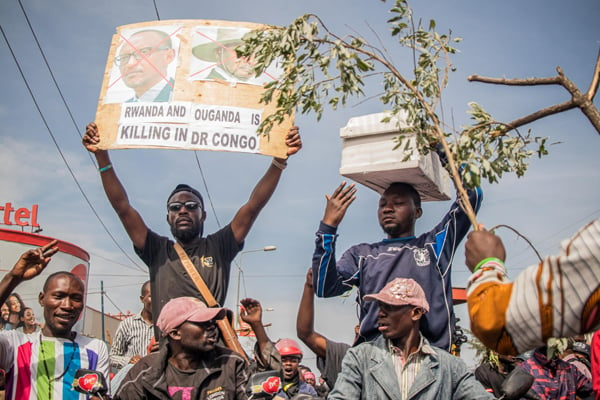 Protesters chanted for weapons to fight Rwanda, as well as slogans hostile to Uganda, which some also accuse of backing the M23.

Thousands of anti-Rwanda protesters marched through the eastern DR Congo city of Goma on Monday, AFP journalists saw, as M23 rebels tightened their grip on the surrounding countryside.

A mostly Congolese Tutsi group, the M23 resumed fighting in late 2021 after lying dormant for years, accusing the Democratic Republic of Congo’s government of failing to honour an agreement to integrate its fighters into the army.

Protesters chanted for weapons to fight Rwanda, as well as slogans hostile to Uganda, which some also accuse of backing the M23.

Police officers used tear gas to disperse protesters in Goma from the border post with Rwanda.

“We denounce the hypocrisy of the international community in the face of Rwanda’s aggression,” said Mambo Kawaya, a civil society representative attending the demonstration.

The group’s resurgence has destabilised regional relations in central Africa, with the DRC accusing its smaller neighbour Rwanda of backing the militia.

The front line between the Congolese military and the M23 had been calm for several weeks, but fresh clashes from October 20 saw the militia make advances across North Kivu province.

The rebels “continued to advance north today” while DR Congo troops are “concentrated” in the south “to block their advance on Goma”, it added.

The United Nations said it was worried by the fighting and estimated that it has forced some 50,000 people from their homes in the space of 11 days, including more than 10,000 who fled into Uganda.

Rebels in recent days seized the towns of Kiwanja and Rutshuru, along a strategic highway leading to the provincial capital Goma, which lies on the Rwandan border.

The United States on Monday renewed concern that Rwanda is backing the M23.

“State support of armed groups is unacceptable, and we reiterate our concern about Rwanda’s support to the M23,” State Department spokesman Ned Price told reporters on Monday.

He said US officials have been in frequent contact over the past week with counterparts in both Rwanda and DR Congo on the escalating tensions.

The DRC’s government decided to expel Rwanda’s ambassador on Saturday. Rwanda stated that it had noted the decision “with regret”.

The ambassador, Vincent Karega, left the DRC on Monday.

The M23 rebel group first leapt to prominence in 2012 when it briefly captured Goma before a joint Congolese-UN offensive drove it out.

It is one of scores of armed groups that roam eastern DRC, many of them a legacy of two regional wars that flared late last century.

Despite official denials from Kigali, an unpublished report for the United Nations seen by AFP in August pointed to Rwandan involvement with the M23.

The same report said the M23 plans to capture Goma, an important trade hub of about one million people, to extract political concessions from the Congolese government.

Rwandan President Paul Kagame tweeted on Monday that he had held a discussion with UN chief Antonio Guterres on how to de-escalate.